Remember to send your friends our way. We love getting good recommendations. SiopaDoire.com 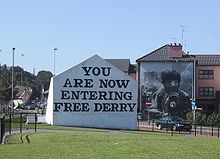 Tensions had been building in Derry for over a year before the Battle of the Bogside. In part, this was due to long-standing grievances held by much of the city's population. The city had a majority catholic and nationalist population. In 1961 for example, the population was 53,744, of which 36,049 was Catholic and 17,695 Protestant. However after the partition in 1921, it had been ruled by the Unionist government.
Unionists maintained political control of Derry by two means. Firstly,wards were designed so as to give unionists a majority in the city. The "Londonderry County Borough", which covered the city, had been won by nationalists in 1921. It was recovered by unionists, however, following re-drawing of electoral boundaries by the unionist government in the Northern Ireland parliament. As a result, although Catholics made up 60% of Derry's population in 1961, due to the division of electoral wards, unionists had a majority of 12 seats to 8 on the city council. Subsequently when the possibility of Nationalists gaining one of the Unionist wards arose, the boundaries were redrawn in order to maintain Unionist control. Control of the city council gave Unionists control over the allocation of public housing, which they allocated in such a way as to keep the Catholic population in a limited number of wards.This policy had the additional effect of creating a housing shortage for Catholics.

Secondly, only owners or tenants of a dwelling and their spouses were entitled to vote in local elections. Nationalists argued that these practices were retained by Unionists after their abolition in Great Britain in 1945 in order to reduce the anti-Unionist vote. Gallagher cited figures to show that in Derry city, Nationalists comprised 61.6 per cent of parliamentary electors, but only 54.7 per cent of local government electors. Catholics also alleged discrimination in employment.The Cameron Commission into the riots of 1969 also highlighted the issue of perceived regional bias where Northern Ireland government decisions alleged to favour the mainly protestant east of Northern Ireland rather than the mainly catholic west

Other controversialdecisions affecting Derry were the decision to close the anti-submarine training school in 1965, adding 600 to an unemployment figure already approaching 20 per cent; the decision to site Northern Ireland's new town at Craigavon and the siting of Northern Ireland's second University in Coleraine rather than Derry which was four times larger.
In March 1968, a small number of radicals in the city founded theDerry Housing Action Committee, with the intention of forcing the government of Northern Ireland to change their housing policies. This group was founded principally by local members of the Labour party and members of the Connolly Republican Club (the Northern manifestation of Sinn Fein, which was banned in Northern Ireland). The Housing Action Committee took direct action such as blocking roads and invading local council meetings in order to force them to house Catholic families who were on council's housing waiting list for a long time. By the summer of 1968, this group had linked up with the Civil Rights Association and were agitating for a broader programme of reform within Northern Ireland.

On 5 October 1968, these activists organised a march through the centre of Derry. However, the demonstration was banned. When the marchers, including members of Parliament E McAteer and I Cooper, defied this ban they were batoned by the RUC. The RUC's actions were televised and caused widespread anger in nationalist circles. The following day, 4000 people demonstrated in solidarity with the marchers in Guildhall Square in the centre of Derry. This march passed off peacefully, as did another demonstration attended by up to 15,000 people on 16 November. However, these incidents proved to be the start of an escalating pattern of civil unrest, that culminated in the events of August 1969.
In January 1969, a march  from Belfastto Derry was attacked by loyalists  five miles outside Derry. When the marchers (many of whom were injured) arrived in Derry on 5 January, rioting broke out between their supporters and the RUC, who were seen to have failed to protect the march. That night, RUC members broke into homes in the Catholic Bogside area and assaulted several residents. An inquiry led by Lord Cameron concluded that, "a number of policemen were guilty of misconduct, which involved assault and battery, malicious damage to property...and the use of provocative sectarian and political slogans". After this point, barricades were set up in the Bogside and  patrols organised to keep the RUC out. It was at this point that the famous mural with the slogan "You are now entering Free Derry" was painted on the corner of Columbs Street by a local activist named John Casey.

In April, the first fatal attack arising out of the violence between nationalists and the RUC in Derry occurred. A local man, Samuel Devenny, was badly beaten with batons by RUC members who broke into his home after a riot in the Bogside on 19 April 1969. His teenage daughters were also beaten in the attack. Deveny died from his injuries on 17 July and is sometimes referred to as the first victim of The Troubles. (Although others consider John Patrick Scullion, who was killed 11 June 1966 by the U.V.F. to have been the first victim of the conflict)

After further rioting on 12 July , arising out of the parades on that day, Republicans in Derry set up the D.C.D.A, with the intention of preparing for future disturbances. The members of the DCDA were initially Republican Club  activists, but they were joined by many other left-wing activists and local people. This group stated their aim as firstly to keep the peace, but if this failed, to organise the defence of the Bogside. To this end, they stockpiled materials for barricades and missiles, ahead of the Orange march on 12 August.
The actions of the Bogside residents were co-ordinated to some extent. The D.C.D.A set up a headquarters in a house on Westland Street and tried to supervise the making of petrol bombs and the positioning of barricades. They also set up "Radio Free Derry." Many local people, however, joined in the rioting on their own initiative and impromptu leaders also emerged, such as B Devlin and E McCann and others.

Locals youths climbed onto the roof of the High Flats on Rossville Street, from where they bombarded the RUC below with missiles. When the advantage that this position possessed was realised, the youths were kept supplied with stones and petrol bombs. The RUC were in many respects badly prepared for the "battle". Their shields were too small and did not protect their whole bodies. In addition, their uniforms were not flame resistant and a number were badly burned by petrol bombs. They possessed armored cars and guns, but were not permitted to use them. Moreover, there was no system in place to relieve officers, with the result that the same policemen had to serve in the rioting for three days without rest. The police responded to this situation by flooding the area with cs gas, which caused a range of respiratory injuries among the local people. A total of 1,091 canisters containing 12.5g of CS; and 14 canisters containing 50g of CS, were released in the densely populated residential area. After two days of almost continuous rioting, during which police were drafted in from all over Northern Ireland, the RUC were exhausted, and were snatching sleep in doorways whenever the opportunity allowed.

On 13 August,the Taoiseach  of the Rep of Irelandmade a televised speech about the events in Derry, in which he said that he "could not stand by and watch innocent people injured and perhaps worse." He promised to send the army to the border and to set up field hospitals for those injured in the fighting. Lynch's words were widely interpreted in the Bogside as promising that Irish troops were about to be sent to their aid. Unionists were appalled at this prospect, which they saw as a threatened invasion of Northern Ireland. In fact, although the Irish Army was indeed sent to the border, they restricted their activities to providing medical care for the injured.

By 14 August, the rioting in the Bogside had reached a critical point. Almost the entire community there had been mobilised by this point. The RUC were also beginning to use firearms. Two rioters were shot and injured in Great James' Street. The B-speicals, an auxiliary, mostly Protestant police force, much feared by Catholics for their role in killings in the 1920s, were called up and sent to Derry, provoking fears of a massacre on the part of the Bogsiders.

On the afternoon of the 14th, the prime minister of Northern Ireland , took the unprecedented step of requesting troops to be sent to Derry. Soon afterwards a company of the Prince of Wales own regiment relieved the police, with orders to separate the RUC and the Bogsiders, but not to attempt to breach the barricades and enter the Bogside itself. This marked the first direct intervention of the London government in Ireland since partiton. The British troops were at first welcomed by the Bogside residents as a neutral force compared to the RUC and especially the B-Specials.

Only a handful of radicals in Bogside, notably Bernadette Devlin, opposed the deployment of British troops. This good relationship did not last long however, as the troubles escalated. Over 1000 people had been injured in the rioting in Derry, but no one was killed. A total of 691 RUC men were deployed in Derry during the riot, of whom only 255 were still in action at 12.30 on the 15th. Manpower then fluctuated for the rest of the afternoon: the numbers recorded are 318, 304, 374, 333, 285 and finally 327 at 5.30 p.m. While some of the fluctuation in numbers can be put down to exhaustion rather than injury, these figures indicate that the RUC suffered at least 350 serious injuries. How many Bogsiders were injured is unclear, as many injuries were never reported.